WiFi is the most convenient method to connect to the internet. Not only it is easy to set up, but it is also very convenient to use the WiFi from any place as long as the signals reach there. The biggest problem that anyone faces with WiFi connections is that the signals are not strong enough in certain places or places that are not in the range of the router and hence poor internet speeds.

This is an annoying problem because you cannot access the internet even though everything is working fine, the connection, the bandwidth, the speed, but the signals are not strong enough and hence poor connectivity.

As the name suggests, WiFi Extender is a device that extends the range of your WiFi Network. This is a very useful device that has seen a huge increase in its usage in the past few years. WiFi Extenders can be very efficient and can double the range and coverage of your pre-existing WiFi network. In this way, the signals can reach the far corners of your home and office, resolving this issue of WiFi coverage.

How do WiFi Extenders work?

As mentioned, WiFi Extenders increase the range of your WiFi network and it does so by receiving the already existing WiFi signal of your current network, amplifying its range, and re-transmitting the signals as a new network. 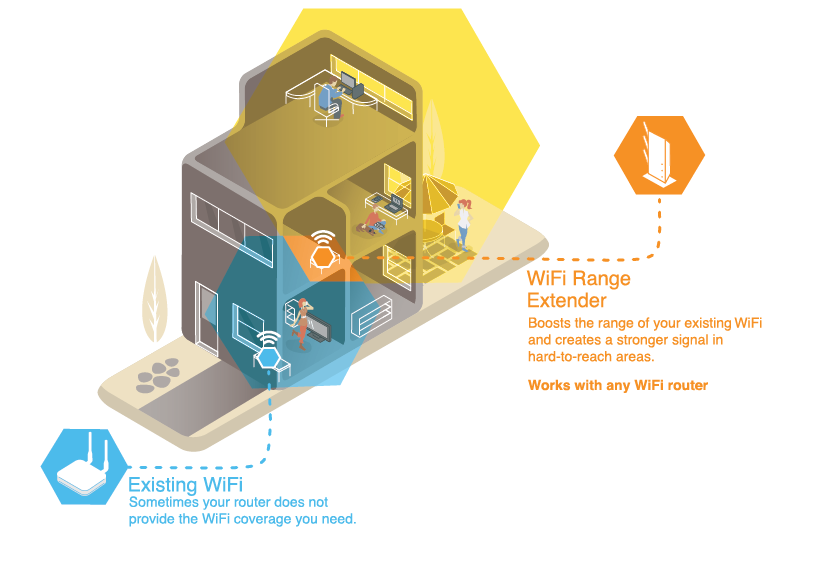 WiFi Extenders should not be confused with WiFi Boosters. Yes, both the devices perform the same function i.e increase the range and coverage of WiFi networks but the way they do so is different. WiFi Boosters are devices that directly plug into the Ethernet port of your wireless router via an Ethernet cable and then broadcasts the signals through a much powerful antenna that improves the range of your WiFi network.

Protect Your Computer Against Virus and Malware

Why Is My Internet So Slow?

What is an IP Address?

What is Internet Bandwidth?

What is 5G Network Technology?

What is a WiFi Extender and How it Works?

5GHz vs 2.4GHz: Which is Better Frequency Band?

How to Fix “Default Gateway Is Not Available” Error?